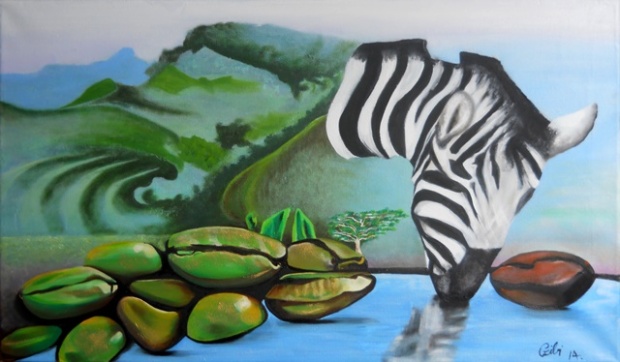 I did this picture for the Coffee Art Project which is a high profile art competition linked to the theme of coffee and is one of the core initiatives of UK Coffee Week.The ultimate objective of this program is to raise valuable funds for and awareness of Project Waterfall, which supports clean water and sanitation initiatives, this year in the Mbulu District in Tanzania, in partnership with WaterAid charity.
This work will be displayed at a pop-up exhibition/gallery and cafe venue in London and at the London Coffee Festival at the Old Truman Brewery, Brick Lane on Marc 2014.
http://www.coffeeartproject.com

I was born in Tiszafüred, Hungary. I have lived in London since 2010 and contributed to the capital’s art scene from the outset. I started painting in the early 90s, while studying and working at the Open Studio Art Foundation of Városliget in Budapest. In the following years I participated in various art project and workshops in Hungary. In 2004 I travelled to Greece and worked briefly in Athens and Crete before returning to Central Europe for my first solo exhibition at the Goethe Institute in Budapest. As a Roma painter I come with a 'different approach': my background to some extent influences my take on life, culture, which, I hope, is reflected in my work. FEEL FREE TO ASK Commissions undertaken. All work for sale. Contact: czibirobert@gmail.com facebook.com/robertczibivisualarts twitter: @arablo Instagram: @czibiart Recent activities: 15 Aug-1 Oct. AQUARELLAND solo exhibition at Bon Matin Cafe, London, Finsbury Park. 7 June-16 June 2017: Sense of belonging: Mozaics from a new Portrait of London at Waterstones Gallery, Gower street. https://www.ucl.ac.uk/festival-of-culture/events/a-sense-of-belonging-mosaics-from-a-new-portrait-of-london 7 May -3rd July 2017: ROOTS a multi artist exhibition at Park Theatre,London. https://www.parktheatre.co.uk/whats-on/exhibition-roots 26 May 2016: Exhibition Vagabond of Bloomsbury part of UCL's Festival of Culture https://www.ucl.ac.uk/festival-of-culture/events/vagabonds-of-bloomsbury .An evening of exhibition an discussion of migration from an intimate, personal perspective of mine. April 23-24, 2016. New York City at NYU. At the Romani/Gypsy Music and Culture Conference ( https://sites.google.com/site/romanigypsyartsandletters/home ) I was deliver a presentation on my Roma identity and my works on the same theme was exhibited during the event. You can have a look at my video installation here: http://youtu.be/kHRsUFl_m38 26 Oct-6 Dec 2015. Solo Exhibition at Sable d'Or Patisserie, London, Muswell Hill. http://hu.euronews.com/2015/11/02/egy-het-alatt-rendezett-kiallitast-londonban-czibi-robert-festomuvesz/ june 2015: London, Park Theatre exhibition "A Spotlight on Hungarian Artists featuring Robert Czibi and the Expecto Patronum.This work is joyful in its celebration of our local artists and represents how our community comes from far and wide. This shines a spotlight on Hungarians." May 2015: UCL Festival of the Arts, I was curator/participator of the exhibition entitled "East European-ize: London through East European Eyes" https://www.ucl.ac.uk/festival-of-the-arts/festival-of-the-arts-news-publication/2015/language-trails-a-journey-through-londons-east-european-heritage April 2015 : Coffee Art Project 2015 in Brick Lane London- collective exhibition - August 2014 : " 130 Views" open Exhibition by Oh! Gallery. It's the celebration of Oxford House 130th anniversary with emerging and established artists.http://oxfordhouse.org.uk/ai1ec_event/130-views-open-exhibition/?instance_id=42192 - Jan 2014 : Escape to happiness present by Guerilla Galleries , collective exhibition - April 2013 : Coffee Art Project in Brick Lane London- collective exhibition I was taking part in Coffee Art Project 2013 by the Allegra Foundation in aid of Project Waterfall, raising money to supply clean water to the Mbulu District in Tanzania. I donated my painting which was seen by over 15,000 people during the festival. - May 2013: Summer exhibition of the Red Hand Gallery, London – collective exhibition. Curated by Samuel Miller award winning Artist and the creative force behind the Red Hand Gallery - July 2013: Blink summer exhibition in Crouch End pop in gallery, London– collective exhibition. Crouch End's quirky 1 day arts & design gallery brings 20+ original artists & designers to the summer themed exhibition organized by Sue Irwin-Hunt independent Professional Training & Coaching Professional Previous activities - 2010. Collaborative Art Festival organised by the Open Studio Art Foundation of Városliget, Budapest, and Karma Productions Events Organiser Ltd. I organised art workshops involving the wider community; collective exhibition. - 2010. Collaboration and Community of Gypsy Artists, Fonyód, Hungary, under the auspices of FROKK (Roma Education and Cultural Centre of Budapest). I participated in the one-week workshop and contributed two of five paintings to a collection compiled by FROKK. - 2010. Artus Contemporary Arts Studio, Budapest. Collective exhibition at the Autumn Salon. - 2010. Subjective Values Foundation, Budapest, in collaboration with Media 19 Studio, London. I took part in a workshop titled We Are Here, which is part of an art and social project, with a poster titled India or Egypt, reflecting on beliefs and misconceptions about the origins of Romany people. View all posts by Robert Czibi